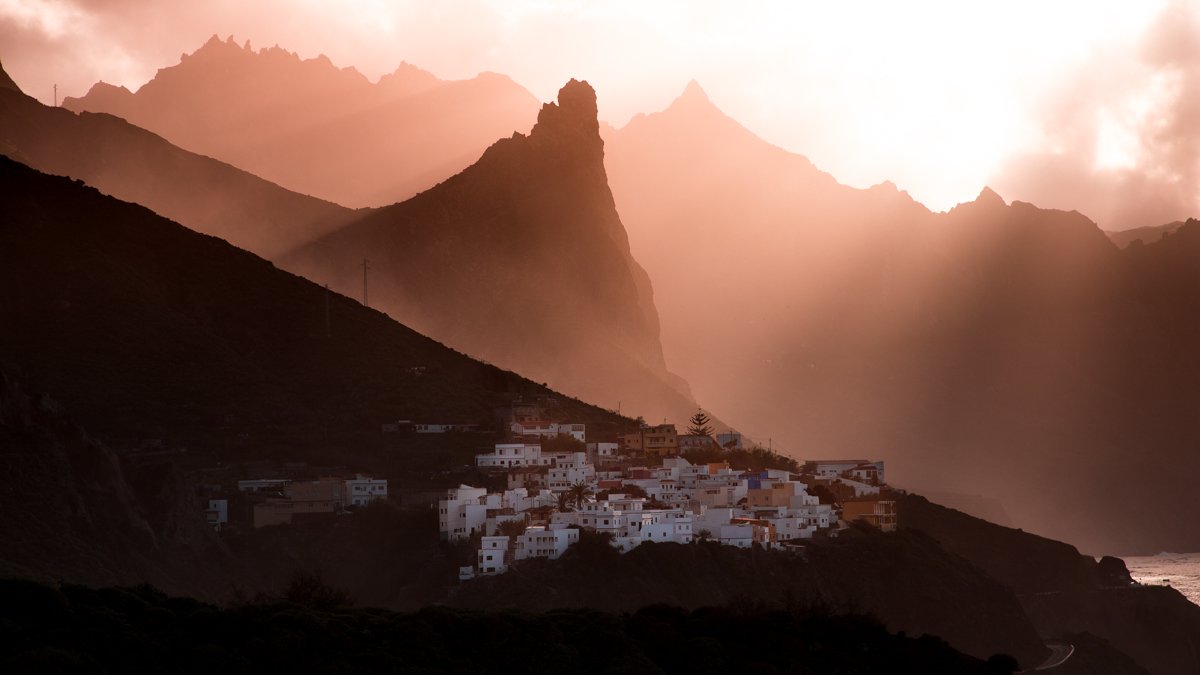 Before my girlfriend suggested Tenerife as a quick holiday spot I knew very little about the Island. Aside from the fact that it was warmer and cheaper than Germany, therefore probably full of Germans. Bingo.

But the natural beauty of Tenerife caught me by surprise. Tenerife is a tropical island with a (3718m) snow-capped volcano right in the middle of it. The jagged coastline is full of stunning black-sand beaches and dotted with quaint villages, and the varying altitude means that the climate literally changes with every kilometre you drive.

Sure it’s touristy and a little tacky in places, but the island has retained a lot of it’s Spanish charm, and the landscape is unparalleled. We hired a car to get around (do) – a Fiat 500 wagon (don’t). From what we’d read beforehand I expected the roads to be horrific. They are steep, windy and narrow for sure, but provided you’re a semi-competent and confident driver it’s no biggie. I’ve seen a lot worse in New Zealand and to be honest the Fiat was my biggest concern.

Anyone who knows me well will agree that I seem to find myself in situations that aren’t ideal on a regular basis. It turns out Daria is the same, and together we make an ultimate team. On day two we got up before sunrise to drive an hour and catch the first cable car up the Teide. Too windy – closed for the day. Lets hike the Masca valley! Closed – Germans got stuck there last week. But, amongst cancelled airport trains, an unplanned 3 hour scenic view of the tarmac in Seville, watching our car get towed past us as we carried our gear to it, and catching the flu, we still managed to have an epic time.

I also took a few snaps, so I’ll let the pictures do the rest of the talking.

Puerto De La Cruz, our home for 4 nights. Population around 30,000. The city lively and packed full of restaurants, though still small enough to get around on foot.

The Atlantic pounding the rocks of Punta Brava. Not the Idyllic turquoise water beach scenes you expect from a tropical Island, but I’d take pumping surf any day.

Did I mention that the Fiat 500L was a mistake? Not because it struggled, just because it was embarrassingly ugly and no fun to drive on roads like this. While there are endless corners and hills on Tenerife, the roads are actually in pretty good condition. If anything we were surprised at how slow and cautious most other drivers were. If you’ve ever driven around New Zealand you’ll be sweet.

The drive from the main city, Santa Cruz, across north of Tenerife to Benijo was epic. I can’t stress the value of having your own transport enough. I think we paid 12 Euro per day plus an optional 60 Euro for full insurance, so it’s cheap! And getting around without a car would have been a nightmare.

Sunset over La Gomera, the second smallest of the Canary Islands. This was the view from Piscina Natural (natural pool) in Los Gigantes.

Pico del Teide, 3718m. Highest point in Spain and the third highest volcano in the world (highest if you exclude the Hawaiian Islands, which we don’t. So third it is). We didn’t get to go to the peak, but the views from the top of the road were still epic.

Los Gigantes (The Giants). These cliffs rise up to 800m in places and make for some pretty incredible viewing. More significantly, this is where I swam in the Atlantic for the very first time.

The view from our apartment in Puerto de la Cruz. It seems like each apartment building here was built without taking any of the neighbouring apartments into consideration. It’s a complete mess, but it comes together beautifully.

Benijo Beach was the most recommended destination for sunset, and it was beautiful. But if you want to see the sun setting over the ocean this would be a better spot in the summer months.

Apparently the only golden sand beach on Tenerife is the one near Santa Cruz – Playa de Las Teresitas. Although that sand is actually stolen from the Sahara. Anyway, the black volcanic sand reminds me a lot of the beaches on the West Coast of New Zealand. I’m a fan, until I have to walk across it on a hot day. Pack some extra thick jandals.

Playa de Benijo from above.

Is Broome the Most Beautiful Beach Town in Australia?

Loved the blog. Fantastic photos and enjoyed the honest and helpful travel tips. ?

mate, you need to submit this to a tourist publication or the like. gotta start somewhere, and keep knocking on the door. just do it!
someone will take notice and want you to do more of this stuff for them.

Incredible shots. How did you get all of the overhead shots. So amazing

Thanks a lot Patricia! Always nice to get positive feedback. I use a drone for my overhead shots. Which was your favourite?

You have such a good eye, Paul. Enjoyed your blog too!

Thanks a lot Joy! Any trips to Switzerland planned in the near future?

Wow Paul, so good to see some of your awesome piks again!! Agree with Dad by the way!

Thanks Barb! Haha yeah, same… I guess. Easier said than done though!

Thanks Graeme! Well i’d definitely recommend it if you get the chance!

Wow, wow & wow!!!
Paul your pictures are exquisite.
I want to travel here now just to experience what your eyes have seen.
You have a gift.
Keep it flowing.
X

Hey Holly! Oh thanks so much 🙂 Serious one of the most stunning places I’ve been, and underrated too!

The south is more arid but definitely some yellow beaches there. The more we go the more we find. Masca great but some other fantastic walks to discover.

Oh, really? I guess my source about the beaches was wrong – thanks for letting me know! I wish I’d had more time to spend discovering the island (and the other islands). I’d heard really great things about Masca, so we were really disappointed we couldn’t do that walk. Next time, maybe!

Hi Jesper, thanks a lot for that!

Easy to check out, readable…heck I needed to leave a commment!

Well I’m glad you did! Thank for the feedback 😉

Blogging is not my day job definately. Im trying to promote my
business by wanting to write about it. But crap could it be ever
difficult. I really do admire your articles,
and I needed to comment to just
give you kuddos on wonderful content and information.

It is definitely difficult – probably why I haven’t done it for so long! Thank you so much for the comment though, and don’t give up! 🙂

Easy to check out, readable…heck I had developed to leave a commment!